BRIDGES TO THE WORLD 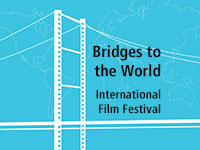 The Bridges to the World International Film Festival is a celebration of Maryland’s global reach and a reflection of those connections in the state.  It is coordinated by World Artists Experiences and Maryland’s Office of the Secretary of State International Division.   2021 is our 13th Season and highlights films from: Mozambique, Latvia, Mexico, Japan, and Egypt.  The films are selected and sponsored by the embassy of each country and are screened in six distinct regions of Maryland:  Annapolis, Bowie, California, Cumberland, Salisbury, and Towson.   Each film is introduced and is followed by a discussion.

The 2021 Bridges to the World Film Festival Introductions and Country Information
Mozambique:

A look at Mozambique, the country of origin for the first film in the 2021 Bridges to the World Film Festival, "On the Frontline: the Rangers of Gorongosa National Park"

LATVIA: The introduction to "Mello Mud" from the February 9th zoom viewing of the film. https://youtu.be/zoGMIrOtLd4

MEXICO: The introduction to "Redes" from the February 16th zoom viewing of the film. https://youtu.be/nNjGS2SQwog

JAPAN: The introduction to "For Love's Sake" from the February 23rd zoom viewing of the film.

EGYPT: The introduction to "The Citizen" from the March 2nd zoom viewing of the film. https://youtu.be/IySd8t40L2Q

To have cultural ambassadors in each school who can build bridges to the world; motivating and challenging all of the school staff and students to develop world knowledge, citizenship and spirit thus enhancing mutual understanding, respect, trust, hope and peace in the world.

Who is a Cultural Ambassador in Schools?